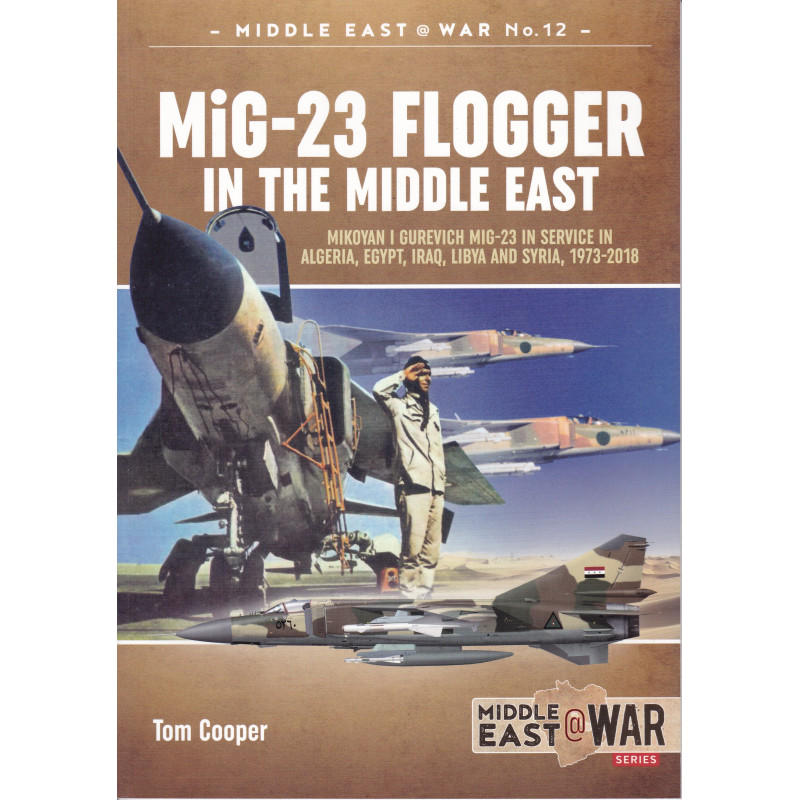 MiG-23 Flogger in the Middle East

Mikoyan i Gurevich MiG-23 in Service in Algeria, Egypt, Iraq, Libya and Syria, 1973 until Today

This is a detailed history of the operational service of this Soviet-manufactured interceptor and its fighter-bomber variants in service with Algerian, Egyptian, Iraqi, Libyan, and Syrian air forces, since 1974.

Following a protracted research and development phase, Mikoyan Gurevich's MiG-23 finally entered service with the former Soviet Air Force in the early 1970s. Almost immediately, a number of foreign customers pressed Moscow for deliveries of this long-overdue type, expected to succeed the popular MiG-21 as a standard interceptor. Correspondingly, large numbers of MiG-23 interceptors and fighter-bombers were exported to five major Arab air forces in the mid-1970s.

This is a detailed history of the operational service of this Soviet-manufactured interceptor and its fighter-bomber variants in service with Algerian, Egyptian, Iraqi, Libyan, and Syrian air forces, since 1974. While Egypt purchased only a handful before its final break with Moscow, and Algeria limited related acquisitions, Iraq, Libya and Syria continued purchasing advanced variants in significant numbers through the 1980s. The units operating MiG-23s were soon transformed into the backbone of the military services in question, and they saw combat service in a number of intensive military conflicts. In the 1980s, they fought against Israeli jets over Lebanon, against the Iranians in the Iran-Iraq War, and confronted US Navy's F-14s on numerous occasions off Libya. In 1991 Iraqi MiG-23s were deployed in combat against the US-led coalition's F-15s. Indeed, in Syria, different versions of MiG-23 continue flying combat operations today.

Illustrated with over 110 photographs - many of these never published before -colour profiles and a dozen maps, this volume provides a unique point of reference, revealing much detail about camouflage patterns, unit insignia and aircraft markings.